Word(s) of the day

the body of work of a painter, composer, or author.

“the complete oeuvre of Mozart”

carry out a search or investigation in the manner of a detective.

make (someone) agitated or confused.

“Rakesh seemed rather flustered this morning”

“an official described progress in the talks as glacial“ 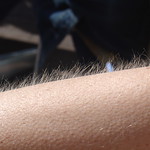 Have you ever been listening to a great piece of music and felt a chill run up your spine? Or goosebumps tickle your arms and shoulders? The experience is called frisson (pronounced free-sawn), a French term meaning “aesthetic chills,” and it feels like waves of pleasure running all over your skin. Some researchers have even dubbed it a ‘skin orgasm.’ [more]

“love him or hate him, you have to admire Cohen’s chutzpah“

a minor dispute or disagreement.
“she had occasional contretemps with her staff”

an unexpected and unfortunate occurrence.
“The hotel had to deal with more than one contretemps before the end of the night”

an authoritative warning or order.

(n.) a thing that is not what it is purported to be.
“our current free health service is a sham“

(adj.) bogus; false.
“a clergyman who arranged a sham marriage”

(v.) falsely present something as the truth.
“was he ill or was he shamming?”

(n.) a stupid or worthless person.

(v.) engage in an inconsequential or unproductive activity.
“too much putzing around up there would ruin them”
“For residents of the Bay Area’s fancy, new, tricked-out condo and apartment towers, the coronavirus lockdown is more than a mandate to stay home and putz around in your slippers.”

(n.) a person who is hostile or indifferent to culture and the arts.
“I am a complete philistine when it comes to paintings”

(adj.) hostile or indifferent to culture and the arts.
“a philistine government”

Use these words in your own sentences and write them in comments.

Any cookies that may not be particularly necessary for the website to function and is used specifically to collect user personal data via analytics, ads, other embedded contents are termed as non-necessary cookies. It is mandatory to procure user consent prior to running these cookies on your website.