Word(s) of the day

Today, I’m reading Good with Words by Patrick Barry. I’ve learned the following words from chapter 1 of the book:

Given that Mr. Louis maintained a good-faith belief that he could more rapidly serve patients by utilizing a pharmacist’s password, he was not willfully and wantonly disregarding his employer’s interest and thus should not be disqualified from unemployment benefits.
Source: Good with Words

(n.) a painful stiff feeling in the neck or back.

(v.) twist or strain (one’s neck or back), causing painful stiffness.
“I turned my head so quickly that I cricked my neck”

As Anne Lamott notes in her best-selling book Bird by Bird: Some Instructions on Writing and Life, there is this myth that professional writers “sit down at their desks every morning feeling like a million dollars, feeling great about who they are and how much talent they have and what a great story they have to tell; that they take in a few deep breaths, push back their sleeves, roll their necks a few times to get all the cricks out, and dive in, typing fully formed passages as fast as a court reporter.”
Source: Good with Words

[law]
: a person who is no longer living : a deceased person
“the estate of the decedent“

I like the term “decedent.” It’s as though the man weren’t dead, but merely involved in some sort of protracted legal dispute.
—Mary Roach, Stiff: The Curious Lives of Human Cadavers (2003)
Source: Good with Words

(n.) a joint formed by one or more tapered projections (tenons) on one piece which interlock with corresponding notches or recesses (mortises) in another. 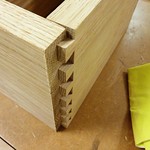 (4) Child Psychology: “This dovetails with new research led by the psychologist Christopher J. Bryan, who finds that for moral behaviours, nouns work better than verbs. To get 3 to 6 year-olds to help with a task, rather than inviting them ‘to help,’ it was 22 to 29 per cent more effective to encourage them to ‘be a helper.’ Cheating was cut in half when instead of, ‘Please don’t cheat,’ participants were told, ‘Please don’t be a cheater.’ When our actions become a reflection of our character, we lean more heavily toward the moral and generous choices.”
—Adam Grant, “Raising a Moral Child” (2014)
Source: Good with words

Use these words in your own sentences and write in comments.

Any cookies that may not be particularly necessary for the website to function and is used specifically to collect user personal data via analytics, ads, other embedded contents are termed as non-necessary cookies. It is mandatory to procure user consent prior to running these cookies on your website.